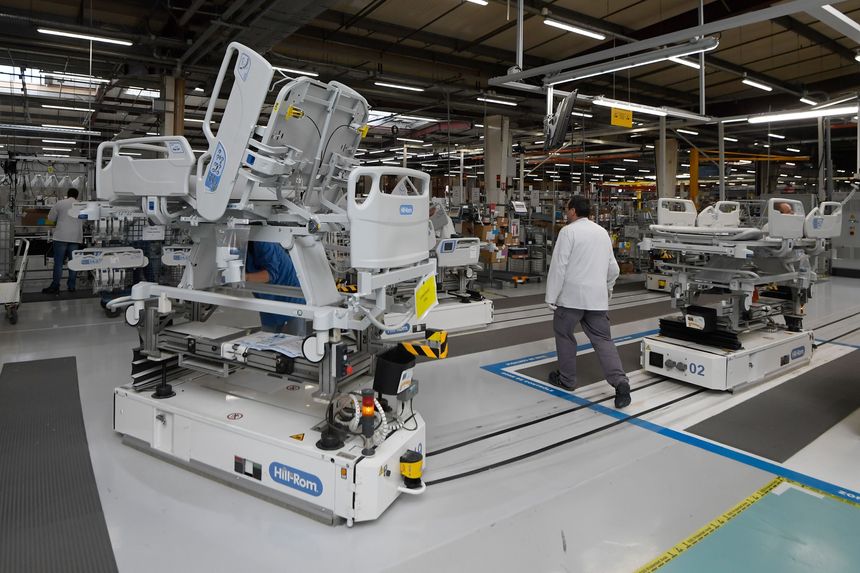 Baxter International Inc. is in advanced talks to buy medical-equipment maker Hill-Rom Holdings Inc.  for around $10 billion, according to people familiar with the matter.

A deal that values Hill-Rom at around $150 a share could be reached by midweek assuming the talks don’t fall apart, the people said.

The talks follow an earlier bid from Baxter worth $144 a share that Hill-Rom rebuffed. Hill-Rom shares jumped in late July on news of that bid and have remained elevated, closing Friday at $132.90. Hill-Rom currently has a market capitalization of nearly $9 billion. Baxter’s is around $37 billion.

Baxter is a medical-technology company based in Deerfield, Ill., that focuses on areas including critical care, nutrition and surgical products.

There has been a boom in healthcare merger activity this year as companies in the industry jockey for scale and other benefits that deals bring, in many cases taking advantage of elevated stock prices used as currency.

They have struck $399 billion of takeover deals in the U.S. so far this year, more than double last year’s pace, according to Dealogic.

In June, a group of private-equity firms reached a deal to acquire Medline Industries Inc. that values that closely held medical-supply company at more than $30 billion. If completed, it would be the largest leveraged buyout since the 2008-09 financial crisis. Then, earlier in August, healthcare-software firm Inovalon Holdings Inc. agreed to be sold to a group of private-equity firms for more than $6 billion.

Overall U.S. deal activity has roughly tripled so far this year to nearly $2 trillion as the economy bounces back from the pandemic-triggered slowdown.

By Cara Lombardo and Dana Cimilluca

Amgen Inc., the maker of cancer treatments and blood boosters to combat anemia, reported first-quarter profit that topped analysts’ estimates and raised its forecast for the year on stronger-than-expected drug sales. The shares rose in late trading.

Researchers at the University of Hertfordshire and a team of European partners have developed a prototype of a robotic glove which stroke sufferers can use in their own home to support rehabilitation and personal independence in receiving therapies.