Tough as plastic wrap but elastic like a balloon, the lining could be a target for therapies to limit cancer cells from spreading. 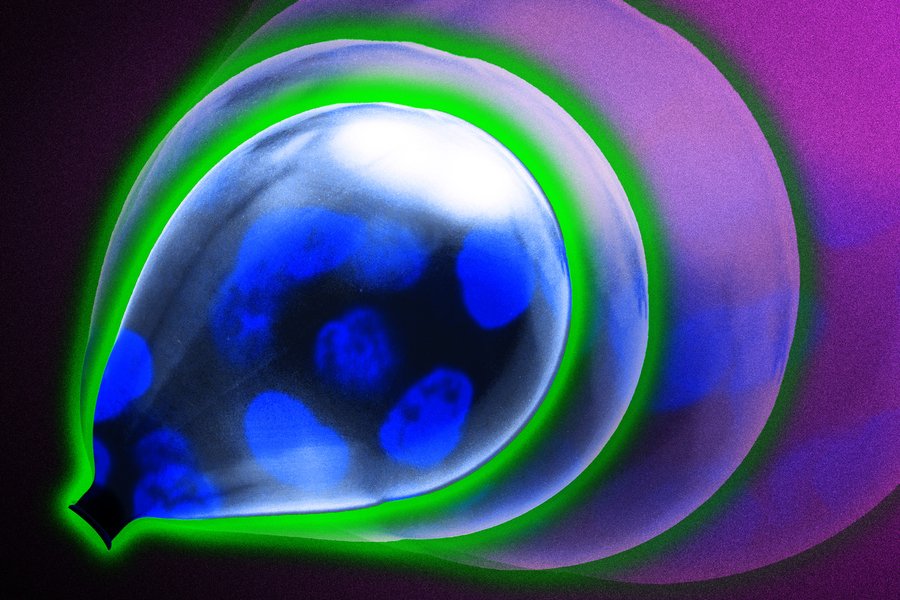 MIT researchers have found that a common biological membrane has elastic qualities similar to a balloon, but also different in ways that may help prevent cancer cells from metastasizing.
Credits:
Image: Jose-Luis Olivares, MIT, with cell images courtesy of the researchers


For cancer cells to metastasize, they must first break free of a tumor’s own defenses. Most tumors are sheathed in a protective “basement” membrane — a thin, pliable film that holds cancer cells in place as they grow and divide. Before spreading to other parts of the body, the cells must breach the basement membrane, a material that itself has been tricky for scientists to characterize.

Now MIT engineers have probed the basement membrane of breast cancer tumors and found that the seemingly delicate coating is as tough as plastic wrap, yet surprisingly elastic like a party balloon, able to inflate to twice its original size.

But while a balloon becomes much easier to blow up after some initial effort, the team found that a basement membrane becomes stiffer as it expands.

This stiff yet elastic quality may help basement membranes control how tumors grow. The fact that the membranes appear to stiffen as they expand suggests that they may restrain a tumor’s growth and potential to spread, or metastasize, at least to a certain extent.

The findings, published this week in the Proceedings of the National Academy of Sciences, may open a new route toward preventing tumor metastasis, which is the most common cause of cancer-related deaths.

“Now we can think of ways to add new materials or drugs to further enhance this stiffening effect, and increase the toughness of the membrane to prevent cancer cells from breaking through,” says Ming Guo, a lead author of the study and associate professor of mechanical engineering at MIT.

The basement membrane envelopes not only cancerous growths but also healthy tissues and organs. The film — a fraction of the thickness of a human hair — serves as a physical support that holds tissues and organs in place and helps to shape their geometry, while also keeping them separate and distinct.

Guo’s group specializes in the study of cell mechanics, with a focus on the behavior of cancer cells and the processes that drive tumors to metastasize. The researchers had been investigating how these cells interact with their surroundings as they migrate through the body.

“A critical question we realized hasn’t gotten enough attention is, what about the membrane surrounding tumors?” Guo says. “To get out, cells have to break this layer. What is this layer in terms of material properties? Is it something cells have to work really hard to break? That’s what motivated us to look into the basement membrane.”

To measure the membrane’s properties, scientists have employed atomic force microscopy (AFM), using a tiny mechanical probe to gently push on the membrane’s surface. The force required to deform the surface can give researchers an idea of a material’s resistance or elasticity. But, as the basement membrane is exceedingly thin and tricky to separate from underlying tissue, Guo says it’s difficult to know from AFM measurements what the resistance of the membrane is, apart from the tissue underneath.

Instead, the team used a simple technique, similar to blowing up a balloon, to isolate the membrane and measure its elasticity. They first cultured human breast cancer cells, which naturally secrete proteins to form a membrane around groups of cells known as tumor spheroids. They grew several spheroids of various sizes and inserted a glass microneedle into each tumor. They injected the tumors with fluid at a controlled pressure, causing the membranes to detach from the cells and inflate like a balloon.

The researchers applied various constant pressures to inflate the membranes until they reached a steady state, or could expand no more, then turned the pressure off.

“It’s a very simple experiment that can tell you a few things,” Guo says. “One is, when you inject pressure to swell this balloon, it gets much bigger than its original size. And as soon as you release the pressure, it gradually shrinks back, which is a classical behavior of an elastic material, similar to a rubber balloon.”

As they inflated each spheroid, the researchers observed that, while a basement membrane’s ability to inflate and deflate showed that it was generally elastic like a balloon, the more specific details of this behavior were surprisingly different.

To blow up a latex balloon typically requires a good amount of effort and pressure to start up. Once it gets going and starts to inflate a bit, the balloon suddenly becomes much easier to blow up.

“Typically, once the radius of a balloon increases by about 38 percent, you don’t need to blow any harder — just maintain pressure and the balloon will expand dramatically,” Guo says.

This phenomenon, known as snap-through instability, is seen in balloons made of materials that are linearly elastic, meaning their inherent elasticity, or stiffness, does not change as they deform or inflate.

But based on their measurements, the researchers found that the basement membrane instead became stiffer, or more resistant as it inflated, indicating that the material is nonlinearly elastic, and able to change its stiffness as it deforms.

“If snap-through instability were to occur, a tumor would become a disaster — it would just explode,” Guo says. “In this case, it doesn’t. That indicates to me that the basement membrane provides a control on growth.”

The team plans to measure the membrane’s properties at different stages of cancer development, as well as its behavior around healthy tissues and organs. They are also exploring ways to modify the membrane’s elasticity to see whether making it stiffer will prevent cancer cells from breaking through.

“We are actively following up on how to modify the mechanics of these membranes, and apply perturbations on breast cancer models, to see if we can delay their invasion or metastasis,” Guo says. “This is an analogy to making a stiffer balloon, which we plan to try.”

This research was supported, in part, by the Alfred Sloan Foundation and the National Cancer Institute.