Tiny brains-in-a-dish that mimic the major pathological features of Parkinson’s disease have been made for the first time. The research, led by scientists from the Agency for Science, Technology and Research (A*STAR)’s Genome Institute of Singapore (GIS), the National Neuroscience Institute (NNI) and Duke-NUS Medical School, published in the Annals of Neurology, offers a new way to study how the degenerative brain disease progresses and explore possible new treatments.


Parkinson’s disease is a common age-related neurodegenerative disorder affecting three in 1,000 Singaporeans aged 50 years and above. Worldwide, neurological disorders are the leading cause of disability, and Parkinson’s disease is the fastest growing disorder. Prior research has mostly relied on mice, which do not reproduce all major pathological features seen in patients.

The team decided to turn to human mini-brains that they created previously.

“We called these ‘human midbrain-like organoids’,” said first author Dr Junghyun Jo, previously a Research Fellow at GIS and now a Principal Investigator at the Okinawa Institute of Science and Technology Graduate University. “They are essentially three-dimensional, multicellular, in vitro tissue constructs that mimic the human midbrain.”

The small pea-sized human midbrain-like organoids are grown from human stem cells into a bundle of neurons and other cells found in the brain. The organoids enable scientists to study how the human brain develops and communicates.

“These experiments are the first to recreate the distinctive features of Parkinson’s disease that we see only in human patients,” said Associate Professor Hyunsoo Shawn Je, a senior co-author from the Neuroscience and Behavioural Disorders Programme at Duke-NUS. “We have created a new model of the pathology involved, which will allow us to track how the disease develops and how it might be slowed down or stopped.”

By manipulating the DNA of the starting stem cells to match genetic risk factors found in patients with Parkinson’s disease, the study scientists were able to grow organoids with neurons that showed both Lewy bodies and the progressive loss of dopamine-producing neurons.

“It’s a major challenge to extend healthy living years in an ageing global population, whose physical and cognitive performance often declines due to neurodegenerative disorders,” said Professor Tan Eng King, Deputy Medical Director, Academic Affairs, at NNI, a senior co-author of the study. “This discovery provides insights and a ‘humanised’ disease model that can facilitate drug testing against Parkinson’s disease and dementia. Our organoid model with a genetic mutation on the GBA gene is also highly relevant as we have several of these genetic mutation carriers locally.”

The organoid system will enable research into Parkinson’s disease and other conditions not possible with current animal models. The team is already using organoids to investigate why and how Lewy bodies form in human brain cells, and screen drugs that can potentially stop disease progression. 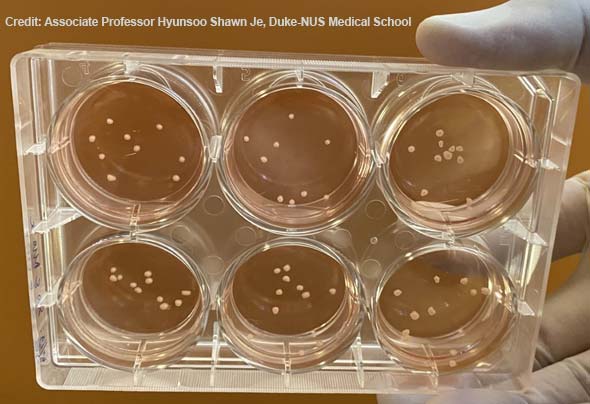