A Johns Hopkins Medicine scientist who spent 30 years figuring out how to put chemical labels into cells to track their movement in living tissues has found that certain self-renewing stem cells have built-in tracers — made out of sugars — that can do the job without added chemical “labels” when injected into mouse brains. The finding, made with stem cells widely engineered into experimental therapies for multiple sclerosis and other neurodegenerative diseases, was a welcome surprise, the investigators say. 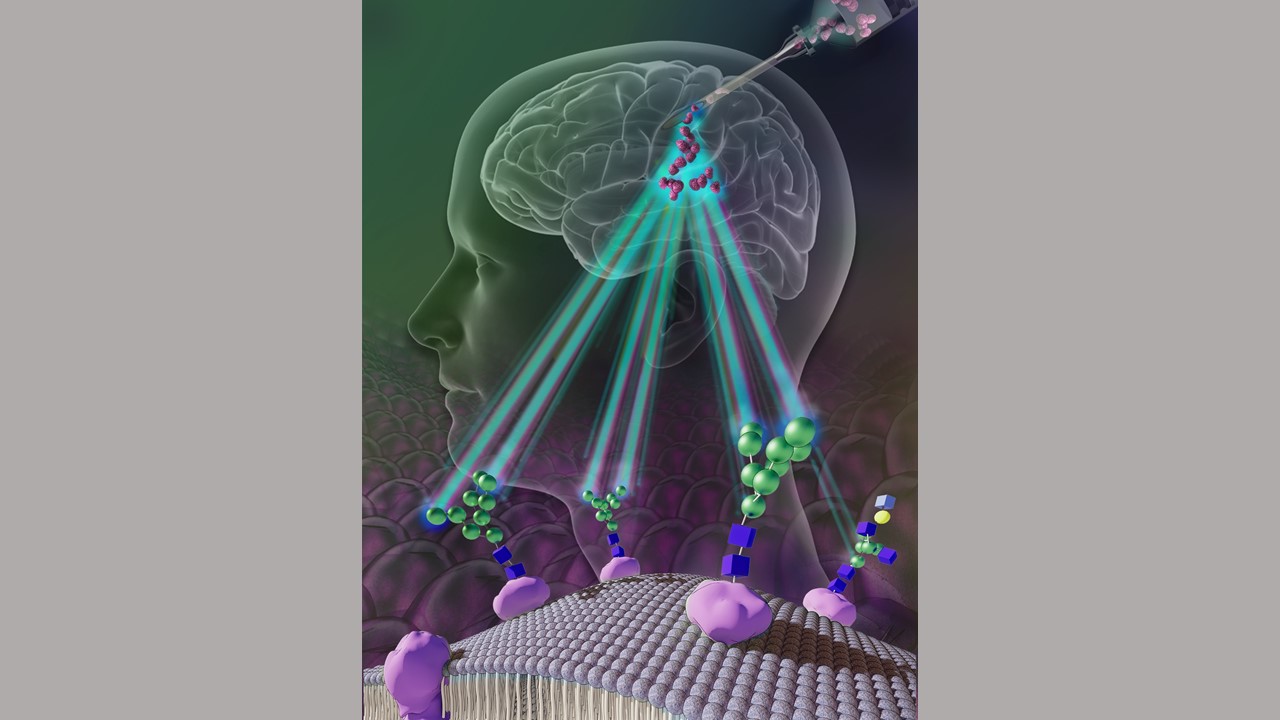 Unlike most other cells, mannose residues (green) are abundant on the MSC cell membrane. Using an MRI technique that is sensitive to the presence of mannose, tracking of transplanted MSCs is now possible without the need of labeling them. Credit: Image courtesy of Shreyas Kuddannaya

“There is an entire scientific field dedicated to chemical and genetic cell labeling, because otherwise, we can’t see where specially and expensively engineered therapeutic cells travel and whether they get to the intended spot in a body to repair or replace diseased tissue,” says Jeff Bulte, Ph.D., professor of radiology and radiological science at the Johns Hopkins University School of Medicine and director of cell imaging for the Johns Hopkins Institute for Cell Engineering.

If confirmed with subsequent experiments, the new study should, Bulte says, streamline and advance restorative research for diseases of the brain, an organ considered the most difficult in which to track therapies because of the sensitive nature of the brain and its blood-brain barrier.

In Bulte’s experience, he says, labeling therapeutic cells that are ready for human clinical trials in any organ is a costly and difficult process, requiring extensive safety studies and keeping teams of scientists focused on finding better ways to track therapeutic cells damaged by multiple sclerosis and other neurodegenerative diseases.

For such research, scientists have long been using so-called mesenchymal stromal cells, a type of stem cell found in the bone marrow that can develop into many types of cells, and also reduce inflammation.

In the new proof-of principle study described Feb. 7 in Nature Biomedical Engineering, Bulte and his research team found that these mesenchymal stromal cells contain high levels of a sugar called mannose, which is similar to glucose and can be spotted easily and successfully with a standard imaging method based on magnetic resonance imaging (MRI).

Bulte’s team got the idea to use sugars as tracers after they published another study in Nature Communications showing that certain tumor cells lose large amounts of sugar molecules easily detected by MRI machines. Yue Yuan, Ph.D., a researcher in Bulte’s lab, found that stem cells have an abundance of mannose — about two to three times the amount found in typical cells.

Because the cells of mammals generally lack a high sugar content, Bulte and his team reasoned, injections of stem cells that naturally contain lots of sugar would potentially be easy to spot against the background of brain tissue.

For their study, Bulte’s team injected four types of human cells into the brains of live mice, including mesenchymal stem cells. For each cell type, the researchers injected 300,000 cells.

Then, the researchers used MRI to track where they found clusters of the injected cells over a two-week period.

They found that the MRI signal of mesenchymal stem cells was about 60% higher than the other three injected cell types, and was easily seen on MR images up to two weeks after injection. Interestingly, they say, only live cells produced an MRI signal, creating an opportunity to use the technique for determining transplanted cell survival, as well as tracking.

Bulte’s team is planning additional studies to determine if the cellular sugar molecules can be used to detect differentiation of stem cells into other cell types.

“It’s extraordinary to find, 30 years after starting my research in the field of labeling cells, that these mesenchymal stem cells in the brain don’t need to be chemically labeled for tracking purposes after all, and there may be better, easier ways to track these cells in the brain,” says Bulte.

This research study was supported by the Pearl and Yueh-Heng Yang Foundation and the National Institutes of Health (R56 NS098520 and P41 EB024495).

In addition to Bulte and Yuan, scientists who contributed to the research while at Johns Hopkins include Congxiao Wang, Shreyas Kuddannaya, Jia Zhang, Dian R. Arifin, Zheng Han, Piotr Walczak and Guanshu Liu.

Bulte is a paid consultant to NovaDip Biosciences SA, NanomediGene LLC and SuperBranche. These arrangements have been reviewed and approved by The Johns Hopkins University in accordance with its conflict-of-interest policies.