By Morgan Kelly, Office of Communications

Princeton University researchers have found that a family of proteins with important roles in the immune system may be responsible for fine-tuning a person’s motor control as they grow — and for their gradual loss of muscle function as they age. The research potentially reveals a biological cause of weakness and instability in older people, as well as a possible future treatment that would target the proteins specifically. 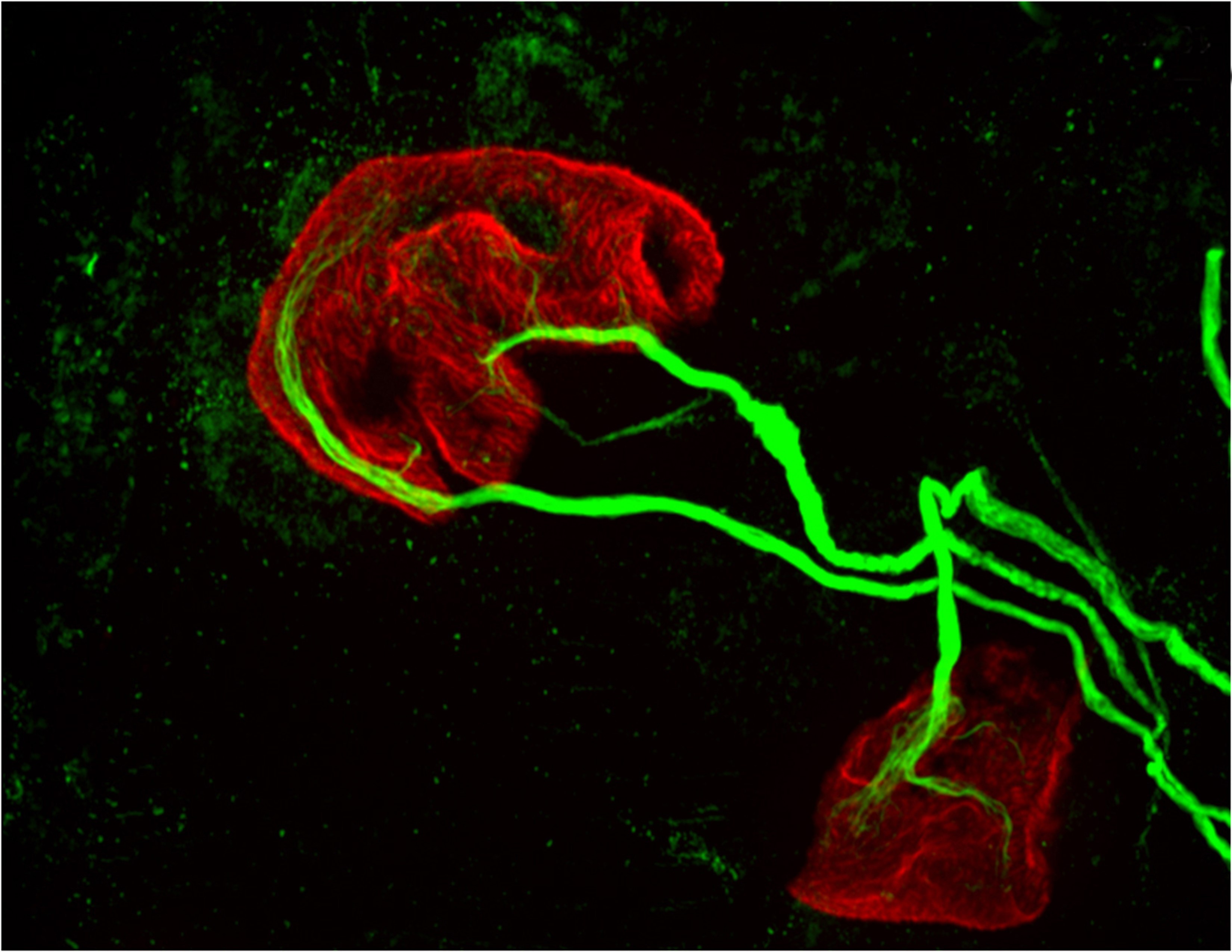 Princeton University researchers found that proteins in the MHCI, or major histocompatibility complex class I, family can “prune” the connections, or synapses, between motor neurons and muscle fibers, which is necessary during early development. But the researchers also found that MHCI levels can rise again in old age, and that the proteins may resume pruning nerve-muscle synapses. This image from a mouse bred to express less MHCI shows two motor neurons (green) connected to a single muscle fiber (red) at an age when only one connection should remain. (Image by Lisa Boulanger, Princeton Neuroscience Institute, and Mazell Tetruashvily, Department of Molecular Biology)

The researchers reported in the journal Brain, Behavior, and Immunity that proteins in the family MHCI, or major histocompatibility complex class I, «prune» the connections, or synapses, between motor neurons and muscle fibers. Pruning is necessary during early development because at birth each muscle fiber in humans, mice and other vertebrates receives signals from dozens of neural connections. Proper motor control, however, requires that each muscle fiber receive signals from only a single motor neuron, so without the pruning carried out by MHCI proteins, fine motor control would never emerge.

But the researchers also found that MHCI levels can rise again in old age, and that the proteins may resume pruning synapses — except that in a mature organism there are no extra synapses. The result is that individual muscle fibers become completely «denervated," or detached from nervous system control. Denervated muscle fibers cannot be recruited during muscle contraction, which can leave older people weaker and more susceptible to devastating falls, making independent living difficult.

However, the Princeton researchers discovered that when MHCI levels were reduced in mice, denervation during aging was largely prevented. These findings could help scientists identify and treat the neurological causes of denervation and muscle weakness in the elderly.

Corresponding author Lisa Boulanger, an assistant professor in the Princeton Neuroscience Institute, explained that in infants, motor neurons initially make far too many connections to muscle fibers, which is part of why infants lack fine motor control. Synapse overproduction followed by pruning occurs in many different regions of the vertebrate nervous system, and the neuromuscular junction has often been used as a model for studying this process.

It is not known why more synapses are made during development than are needed.

One possibility is that it allows the wiring diagram of the nervous system to be precisely tuned based on the way the circuit is used, Boulanger said. MHCI proteins help limit the final number of connections so that communication between neurons and muscles is more precise and efficient than would be possible using just a molecular code that produced a set number of connections.

«Molecules might get you to the right zip code, but pruning can make sure you arrive at the right house," Boulanger said. «During development, it’s essential to get rid of extra synapses. But when you MHCI when you’re older and start pruning synapses again, but you don’t have any extras to replace them.»

Boulanger worked with first author Mazell Tetruashvily, who received her doctorate in molecular biology from Princeton in 2015 and is now completing her M.D. training at University of Medicine and Dentistry of New Jersey; Marin McDonald, who received her doctorate in neuroscience from the University of  Diego (UCSD) in 2010, and is now a radiology resident at UCSD; and Karla Frietze, a doctoral student in Princeton’s Department of Molecular Biology. Boulanger was on the UCSD faculty before moving her lab to Princeton in 2009.

In the immune system, MHCI proteins present protein fragments, or peptides, to T cells, which are white blood cells with a central role in the body’s response to infection. This peptide presentation allows T cells to recognize and kill infected and cancerous cells, which present abnormal or foreign peptides on their MHCI proteins. It is unknown if the proteins’ ability to help recognize and destroy infected or cancerous cells is mechanistically related to the proteins’ ability to help eliminate excess synapses that the Princeton researchers discovered.

In the nervous system, MHCI proteins stop pruning synapses early in life. Why they may resume their activity later in life is unknown, Boulanger said. As  proteins, MHCI levels increase with inflammation, she said. Aging is associated with chronic inflammation, which could explain the observed increase in MHCI levels and the reactivation of its former role. 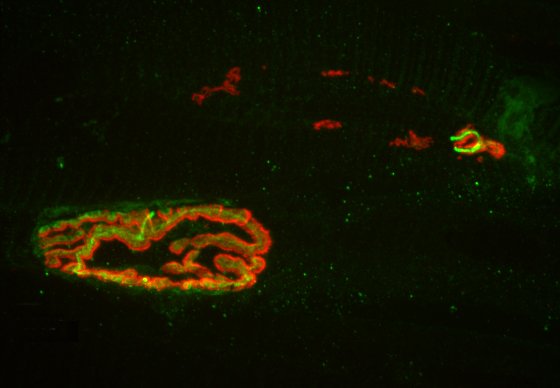 The researchers found that MHCI the proteins may resume pruning nerve-muscle synapses in older organisms, an age when there are no extra synapses. Instead, muscle fibers become completely “denervated,” or detached from nervous system control, which could lead to weakness and instability in older people. This image from a 2-year-old (elderly) normal mouse shows denervation in the upper-right synapse, as noted by the lack of overlap of the red and green fluorescent markers used to indicate cells where the neuron and muscle fiber meet. At lower left, a healthy-looking synapse displays good overlap. (Image by Lisa Boulanger, Department of Molecular Biology)

The Princeton researchers found that mice bred to express less MHCI proteins had «more youthful» patterns of muscle innervation, since they were protected from denervation as they aged, Boulanger said. The mice actually lacked a protein known as  microglobulin, which forms a complex with MHCI and is necessary for MHCI expression on the surface of cells. This could be beneficial from a clinical perspective because microglobulin is a soluble protein and can be removed from the blood, Boulanger said.

«If a rise in MHCI is the problem, having less microglobulin might be protective," Boulanger said. Recent results from a lab at Stanford University showed that reducing microglobulin also helped with cognitive aging because of its effects on MHCI proteins. «Our studies raise the possibility that targeting one protein could help with both motor and cognitive aspects of aging," Boulanger said.

Because MHCI proteins are important in the immune system, however, such an approach could result in compromised immunity, Boulanger said. The mice bred to not express microglobulin had weakened immune systems, as a result of their lower levels of MHCI proteins. Future work will include exploring the effectiveness of other approaches to reducing the proteins’ activity in older nervous systems, ideally while leaving their immune functions intact, she said.