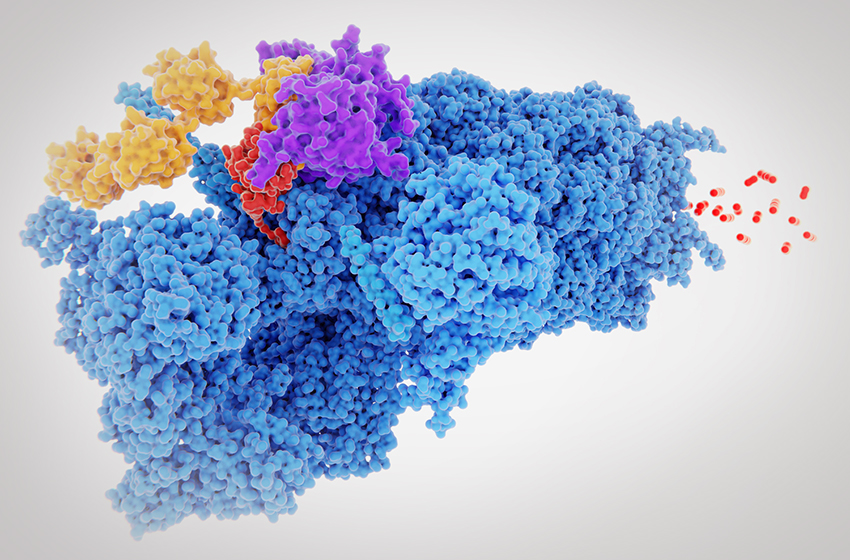 A 3-D illustration of the proteasome (blue), one of the primary molecular machines that cells use to destroy proteins. Here, a protein (red, center) is being unfolded and broken up into its constituent amino acids (right). Image: Getty Images.
The aberrant buildup of misfolded proteins is a hallmark of a host of disorders, including neurodegenerative diseases such as Alzheimer’s and Parkinson’s. Aggregates of these toxic proteins wreak havoc on the function of cells, tissues, and organs, and despite intensive research over many decades, there are still no effective means to remove or to prevent their accumulation in humans.

One promising strategy to achieve this may someday come from an unexpected source—a common class of drugs used to treat erectile dysfunction.

In a recent study, scientists at Harvard Medical School have identified a new mechanism for activating the cell’s protein quality-control system and improving its ability to dispose of misfolded proteins, including ones known to cause neurodegenerative diseases.

Reporting in the Proceedings of the National Academy of Sciences in June, the researchers describe how PDE5 inhibitors—which include the erectile dysfunction drugs sildenafil and tadalafil—lower the accumulation of mutant proteins and reduce cell death and anatomical defects in zebrafish models of neurodegeneration.

“Our study indicates a new approach to combat the basic cause of many neurodegenerative diseases as well as certain rare cardiac and muscle diseases, which are due to the buildup of misfolded intracellular proteins,” said senior study author Alfred Goldberg, professor of cell biology in the Blavatnik Institute at HMS.

This approach is attractive because it utilizes a previously unknown mechanism that cells naturally have to remodel their protein composition through increased degradation, Goldberg added. “Hopefully, these findings will lead to novel therapies in the coming years,” he said.

The results are an early step toward potentially addressing the failure of protein quality control and the accumulation of toxic proteins that underlies many neurodegenerative disorders, the authors said, but they caution that further, in-depth studies are needed.

“By turning on the cell’s garbage disposal system, this widely prescribed class of drug could have a beneficial effect against disorders involving misfolded proteins,” said study first author Jordan VerPlank, research fellow in cell biology in the Blavatnik Institute at HMS. “We now have a new point of entry to explore ways to treat or slow the progression of these diseases.”

In their study, Goldberg, VerPlank and colleagues sought to enhance the activity of the proteasome, one of the primary molecular machines that cells use to destroy proteins, especially ones that are misfolded, unnecessary or damaged.

They were intrigued by evidence in existing scientific literature suggesting that a drug that inhibits the enzyme PDE5—widely used to treat erectile dysfunction and pulmonary hypertension—can increase the degradation of a mutant protein that causes a rare inherited cardiac disease, a type of cardiomyopathy. PDE5 inhibitors function by raising levels of cGMP, a molecule that acts as an intracellular messenger.

To investigate if these drugs affect the proteasome, the research team selected several compounds that boost cGMP levels—sildenafil and tadalafil, PDE5 inhibitors that block the breaking down of cGMP—and two soluble guanylate cyclase activators, which directly increase cGMP production.

The proteasome degrades proteins that are marked for destruction through the attachment of the small molecule ubiquitin. The team found that raising cGMP both enhanced the addition of ubiquitin to proteins, which increased the marking of proteins for degradation, and enhanced the proteasome’s ability to destroy them.

Applied to isolated human cells, these drugs not only rapidly raised proteasome activity, they greatly enhanced degradation of short-lived and long-lived proteins, the latter of which form the bulk of proteins within cells. Notably, this increased degradation occurred only though the proteasome and not through the other degradative system commonly used by cells known as autophagy.

Next, the team investigated whether this drug-enhanced proteasome activity could be effective against the abnormal buildup of misfolded proteins, particularly given that proteasome function is impaired in many neurodegenerative diseases.

To do so, they used zebrafish larvae, developed by collaborators at the University of Cambridge in the U.K., which have genetic mutations in proteins that in humans cause the neurodegenerative conditions Huntington’s disease and tauopathies—a group of disorders caused by the abnormal accumulation of tau protein, including Alzheimer’s disease and frontotemporal dementia.

Notably, treating larvae with these drugs increased the degradation of the mutant tau and huntingtin proteins, reducing the overall levels of these aberrant proteins within neurons. In addition, the team observed reductions in neuronal cell death and in the severity of an abnormal spine curvature caused by mutated tau protein.


Smarter than we thought

The authors caution that these findings do not suggest that PDE5 inhibitors are an immediate treatment for neurodegenerative diseases in humans.

“These results are very promising,” Goldberg said. “But it will be necessary to determine the best and safest way to pharmacologically raise cGMP levels in the brain and to determine at what stage of the disease this approach may be of benefit.”

They are now further probing the underlying mechanisms triggered by these drugs, with a focus on uncovering how cGMP-boosting drugs enhance proteasome activity and potential applications to other neurodegenerative diseases.

Increasing cGMP activates a signaling protein called protein kinase G, which their analysis revealed subsequently adds phosphate, a small chemical modification, to a specific region of the proteasome. Precisely how this regulates the proteasome, however, remains unknown.

“At the cell and molecular level, we have uncovered new ways that cells have to regulate their protein composition,” Goldberg said. “But it is quite unclear how putting a small phosphate group on the very large proteasome particle can accelerate its function and alter cell protein composition. So, there’s a lot to be explored.”

The researchers are now studying how these different modifications added by two distinct signaling systems enhance the proteasome’s abilities and the degradation of different categories of proteins.

Additional authors on the study include Sylwia Tyrkalska, Angeleen Fleming and David Rubinsztein.