Lipids are the building blocks of a cell's envelope - the cell membrane. In addition to their structural function, some lipids also play a regulatory role and decisively influence cell growth. This has been investigated in a new study by scientists at Martin Luther University Halle-Wittenberg (MLU). The impact of the lipids depends on how they are distributed over the plasma membrane.

If plant cells want to move, they need to grow. One notable example of this is the pollen tube. When pollen lands on a flower, the pollen tube grows directionally into the female reproductive organs. This allows the male gametes to be delivered, so fertilisation can occur. The pollen tube is special in that it is made up of a single cell that continues to extend and, in extreme cases, can become several centimetres long. "This makes pollen tubes an exciting object for research on directional growth processes," says Professor Ingo Heilmann, head of the Department of Plant Biochemistry at MLU. 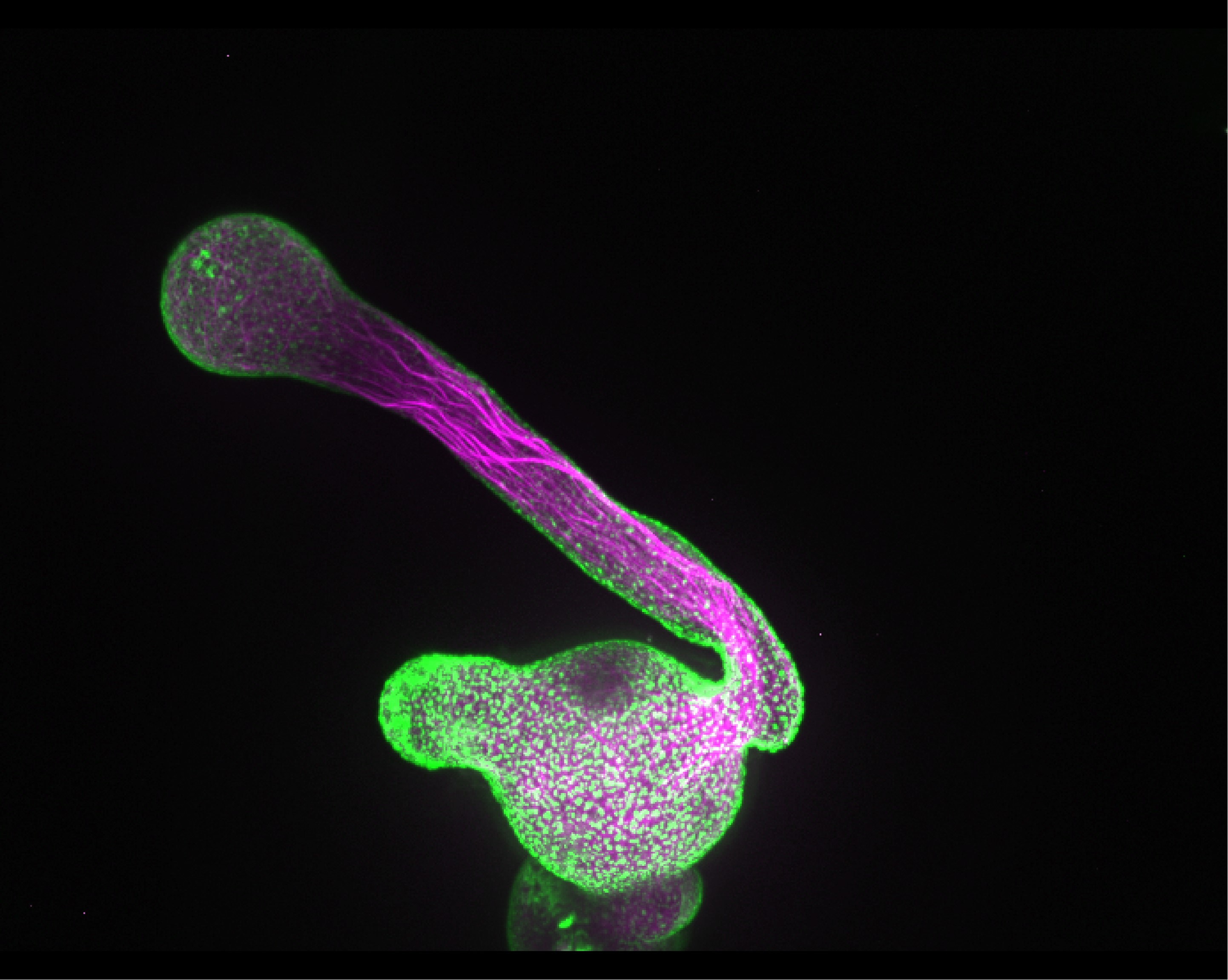 A pollen tube that grows out of a pollen grain (green: one of the enzymes responsible for the production of lipids that control cell growth, magenta: actin cytoskeleton). / Foto: Marta Fratini 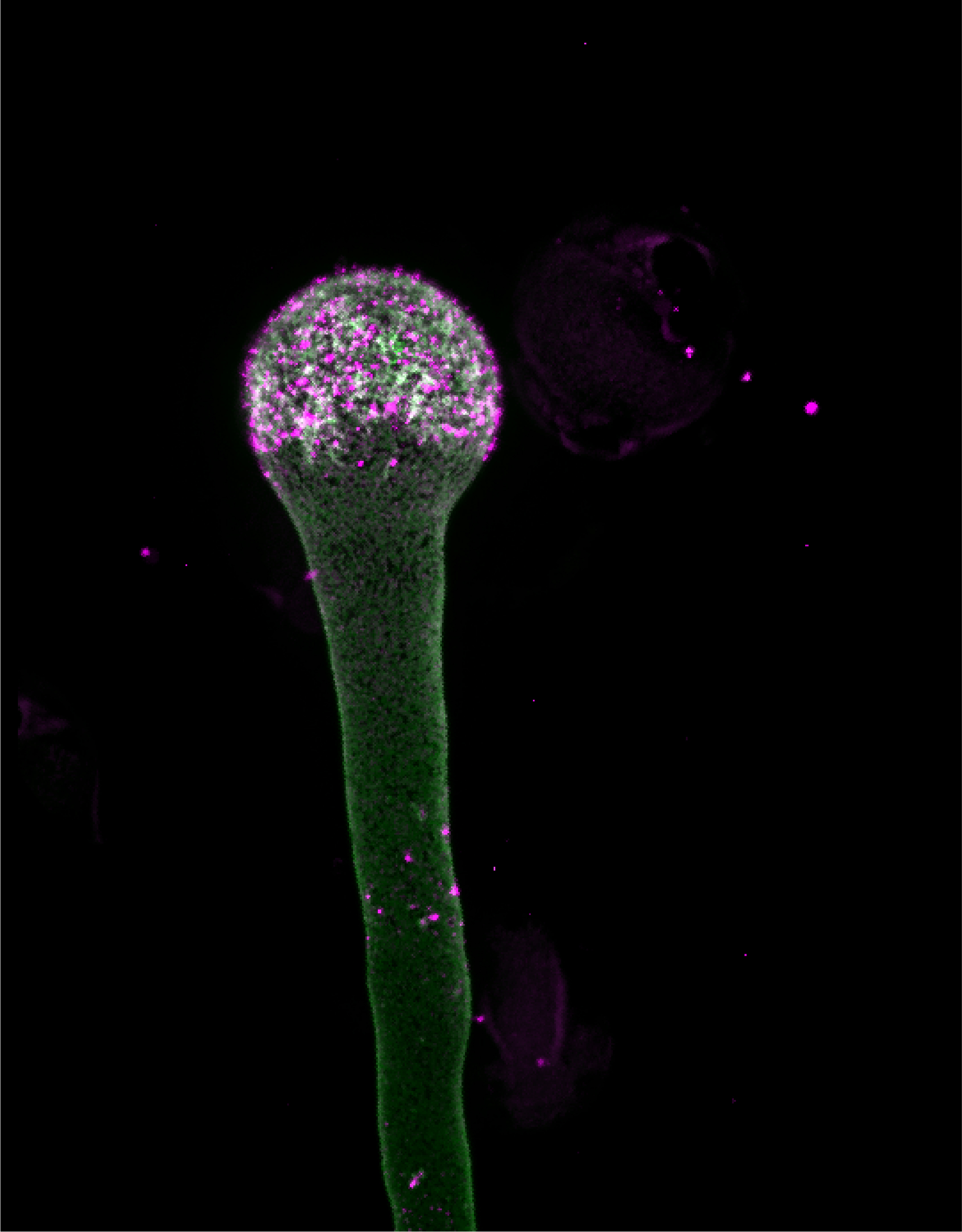 Pollen tube with swollen tip (green: one of the enzymes responsible for lipid production, magenta: the lipid nano domains discovered and described in the study) / Foto: Marta Fratini


For the current study, Heilmann’s team focused on the phospholipids of pollen tubes, which, as the main component of the plasma membrane, are responsible for separating the cell’s interior from its surroundings. "Lipids are generally known to have this structuring function," says Dr Marta Fratini, first author of the study. It has only recently come to light that some phospholipids can also regulate cellular processes. The scientists from Halle have now been able to show that a specific phospholipid called phosphatidylinositol 4,5-bisphosphate ("PIP2") can control various aspects of cell growth in pollen tubes - depending on its position at the plasma membrane. They did this by labelling the lipid with a fluorescent marker. "We found it is either distributed diffusely over the entire tip of the pollen tube without a recognisable pattern, or is concentrated in small dynamic nanodomains," Fratini explains. One can imagine a group of people on a square: either individuals remain 1.5 metres apart as currently prescribed, or they form small groups.

It appears that different enzymes are responsible for the varying distribution of PIP2. "Plant cells have several enzymes that can produce this one phospholipid," explains Heilmann. Like the lipids, some of these enzymes are widely distributed over the membrane and others are concentrated in nanodomains, as shown by the current study. Depending on which of the enzymes the researchers artificially increased, either the cytoskeleton - a structure important for directed growth - stabilised and the pollen tube swelled at the tip, or more pectin - an important building material for plant cell walls - was secreted. This made the cell branch out at the tip. To make sure that the distribution of the lipids was indeed responsible for these growth effects, the biochemists artificially changed the arrangement of the enzymes at the plasma membrane - from clusters to a wide scattering or vice versa. It turns out they were able to control the respective effects on cell growth.

"As far as I know, our study is the first to trace the regulatory function of a lipid back to its spatial distribution in the membrane," says Heilmann. Further research is now needed to clarify exactly how the membrane nanodomains assemble and how the distribution of PIP2 at the membrane can have such varying effects.

The research was funded by the Deutsche Forschungsgemeinschaft (German Research Association, DFG) through various programmes, including the Research Training Group 2498 "Communication and Dynamics of Plant Cell Compartments", and supported by the Centre for Innovation Competence HALOmem at MLU.