Scientists succeed in reducing the levels of the molecules that kill neurons in elderly mice with Alzheimer’s November 20, 2020, 13:28

Researchers at the Universitat Autònoma de Barcelona have developed an antibody fragment that reduces beta-amyloid peptide and tau protein levels, the ultimate cause of neuronal death in Alzheimer's, ameliorating the hallmarks of the disease at its most advanced stage. 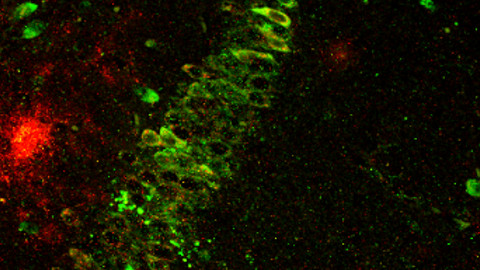 Alzheimer’s disease is the most common dementia worldwide and it is characterized by learning impairment, memory loss, disorientation, and anxiety, among other behavioral and psychological symptoms. Since Alois Alzheimer described the first case at the beginning of the 20th century, important advances have been achieved in terms of understanding physiopathology, but, unfortunately, an effective treatment has not been developed yet.

Although what triggers Alzheimer’s disease it is not well established, several researches claim that the aggregation of the Aβ peptide and of the tau protein, both present in normal brains, plays a pivotal role in Alzheimer’s progression. Moreover, it is worth noting that there is a crosstalk between both, Aβ peptide and tau protein, which means that a reduction or an increase in one of them could affect the other. Thus, therapies directed to reduce Aβ, and recently to reduce tau, have been explored. However, the use of full-length antibodies targeting Aβ has not been effective in ameliorating cognitive decline and produced severe side effects in terms of neuroinflammation.

In previous studies, the Protein Design and Immunotherapy Group at the Department of Biochemistry and Molecular Biology of the UAB, led by Prof. Sandra Villegas, developed an antibody fragment, scFv-h3D6, able to reduce the levels of Aβ and to ameliorate memory loss in young, model of Alzheimer’s disease, mice. However, what happens in advanced stages of the disease has never been studied before.

In a recent study published in the International Journal of Molecular Sciences, the group has demonstrated that scFv-h3D6 is also effective in reducing Aβ levels in old mice, where the pathology is advanced the most. Interestingly, Aβ reduction because of scFv administration also produced a reduction in total tau levels and did not elicit any detectable side effect. Furthermore, a slight reduction in the neuroinflamatory extent featuring the AD brain was observed. Therefore, the treatment is efficient and safe.

"The main point of this study is that we have shown that therapy with antibody fragments works in the late phase of the disease, and not only decreases the main molecule in Alzheimer's, Aβ, but also reduces the levels of a second one, the tau protein, which ultimately kills the neuron and causes dementia”, explains Sandra Villegas.

Future studies targeting both Aβ and tau pathologies in concert could show a putative pharmacological approach to treat this devastating disease.