Programmable bacteria clear tumors in mouse models, and also treat distant tumors that were not injected; this novel method could be used to locally prime tumors and stimulate the immune system to seek out difficult-to-treat tumors 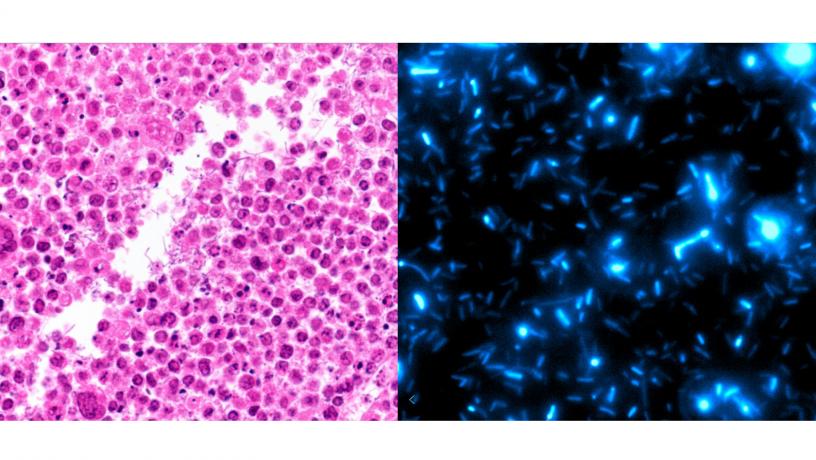 At the same time, cancer immunotherapy—using the body’s immune defenses to fight cancer—has transformed cancer treatment over the past decade, but only a handful of solid tumors have responded, and systemic therapy often results in significant side effects. Designing therapies that can induce a potent, anti-tumor immune response within a solid tumor without triggering systemic toxicity has posed a significant challenge.

Researchers at Columbia Engineering and Columbia University Irving Medical Center (CUIMC) announced today that they are addressing this challenge by engineering a strain of non-pathogenic bacteria that can colonize solid tumors in mice and safely deliver potent immunotherapies, acting as a Trojan horse that treats tumors from within. The therapy led not only to complete tumor regression in a mouse model of lymphoma, but also significant control of distant, uninjected tumor lesions. Their findings are published today in Nature Medicine.

“Seeing untreated tumors respond alongside treatment of primary lesions was an unexpected discovery. It is the first demonstration following a bacterial cancer therapy of what is termed an ‘abscopal’ effect,” says Tal Danino, assistant professor of biomedical engineering. “This means that we’ll be able to engineer bacteria to prime tumors locally, and then stimulate the immune system to seek out tumors and metastases that are too small to be detected with imaging or other approaches.”
Teaming up with the Columbia University Irving Medical Center (CUIMC), Columbia Engineering has addressed this challenge by engineering a strain of non-pathogenic bacteria that can colonize solid tumors in mice and safely deliver potent immunotherapies, acting as a Trojan Horse that treats tumors from within.

The study was led in collaboration with Nicholas Arpaia, assistant professor of microbiology & immunology at CUIMC, and co-senior author on the publication. The team combined their expertise in synthetic biology and immunology to engineer a strain of bacteria able to grow and multiply in the necrotic core of tumors. When bacteria numbers reach a critical threshold, the non-pathogenic E. coli are then programmed to self-destruct, allowing for effective release of therapeutics and preventing them from wreaking havoc elsewhere in the body. Subsequently, a small fraction of bacteria survive lysis and reseed the population, allowing for repeated rounds of drug delivery inside treated tumors. The proof of concept in programming the bacteria in this way was originally developed a few years ago (Din & Danino et al. Nature 2016). In the current study, the authors chose to release a nanobody that targets a protein called CD47.

CD47, a “don’t-eat-me” signal, protects cancer cells from being eaten by innate immune cells such as macrophages and dendritic cells. It is found in abundance on a majority of human solid tumors and has recently become a popular therapeutic target.

“But CD47 is present elsewhere in the body, and systemic targeting of CD47 results in significant toxicity as evidenced by recent clinical trials. To solve this issue, we engineered bacteria to target CD47 exclusively within the tumor and avoid systemic side-effects of treatment,” adds Sreyan Chowdhury, the paper’s lead author and a PhD student co-mentored by Arpaia and Danino.

The combined effect of bacterially induced local inflammation within the tumor and the blockade of CD47 leads to increased ingestion, or phagocytosis of tumor cells and subsequently to enhanced activation and proliferation of T cells within the treated tumors. The team found that treatment with their engineered bacteria not only cleared the treated tumors but also reduced the incidence of tumor metastasis in multiple models.

“Treatment with engineered bacteria led to priming of tumor-specific T cells in the tumor that then migrated systemically to also treat distant tumors,” Arpaia says. “Without both live bugs lysing in the tumor and the CD47 nanobody payload, we were not able to observe the therapeutic or abscopal effects.”

The team is now performing further proof-of-concept tests, as well as safety and toxicology studies, of their engineered immunotherapeutic bacteria in a range of advanced solid tumor settings in mouse models. Positive results from those tests may lead to a clinical trial in patients. They are also collaborating with Gary Schwartz, CUIMC’s chief of hematology/oncology and deputy director of the Herbert Irving Comprehensive Cancer Center, on clinical translation aspects of their work, and have started a company to translate their promising technology to patients.