Nanotheranostics is a cutting-edge field of medicine that uses nanoparticles to simultaneously diagnose and treat diseases. Chemical engineers at EPFL have now developed a novel nanotheranostic system that uses tunable light to activate or image nanoparticles, thus opening a new path for the field. 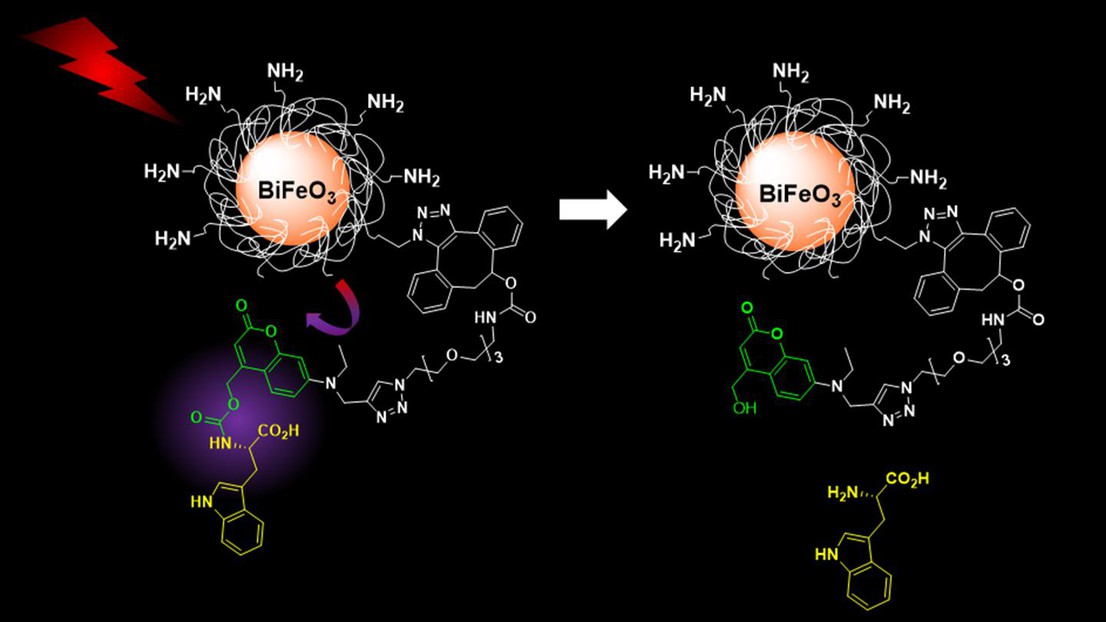 Theranostics is an emerging field of medicine whose name is a combination of “therapeutics” and “diagnostics”. The idea behind theranostics is to combine drugs and/or techniques to simultaneously – or sequentially – diagnose and treat medical conditions, and also monitor the response of the patient. This saves time and money, but can also bypass some of the undesirable biological effects that may arise when these strategies are employed separately.

Today, theranostics applications increasingly use nanoparticles that unite diagnostic molecules and drugs into a single agent. The nanoparticles act as carriers for molecular “cargo”, e.g. a drug or a radioisotope to cancer patients undergoing radiotherapy, targeting specific biological pathways in the patient’s body, while avoiding damage to healthy tissues.

Once at their target tissue, the nanoparticles produce diagnostic images and/or deliver their cargo. This is the cutting-edge technology of “nanotheranostics”, which has become a major focus of research – albeit with many limitations to overcome.

Now, the lab of Sandrine Gerber at EPFL, working with physicists at the University of Geneva, have developed a new nanotheranostic system that overcomes several problems with previous approaches. The system uses “harmonic nanoparticles” (HNPs), a family of metal-oxide nanocrystals with exceptional optical properties, in particular their emission in response to excitation from ultraviolet to infrared light, and their high photostability. It was this feature that brought HNPs into nanotheranostics, when scientists were trying to solve some problems with fluorescent probes.

“Most light-activated nanotheranostic systems need high-energy UV light to excite their photoresponsive scaffolds,” says Gerber. “The problem is that this results in poor penetration depth and can damage living cells and tissues, which limits biomedical applications.”

The new system that Gerber’s group developed avoids these problems by using silica-coated bismuth-ferrite HNPs functionalized with light-responsive caged molecular cargos. These systems can be easily activated with near-infrared light (wavelength 790 nanometers) and imaged at longer wavelength for both detection and drug release processes. Both these features render the system medically safe for patients.

Once light-triggered, the HNPs release their cargo – in this case, L-tryptophan, used as a model. The scientists monitored and quantified the release with a technique that combines liquid chromatography and mass spectrometry, covering the imaging-diagnostic part of the nanotheranostic system.

The authors state that “this work is an important step in the development of nanocarrier platforms allowing decoupled imaging in tissue depth and on-demand release of therapeutics.”